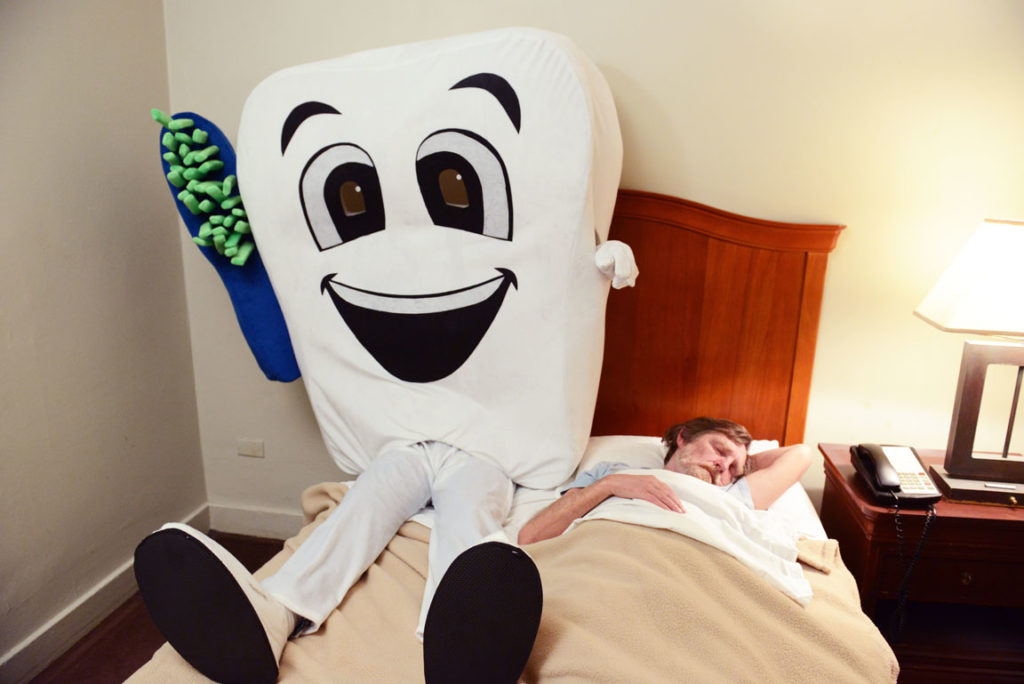 Yes, I set my teenage son up as a prostitute in a shitty hotel* in New York City.

It was for my biggest client… but how security walked in as I was filming this encounter is a far better story.  It was the small accidental fire in the room that caught their attention.  Somehow the sight of me, an old man, a teenager, a large cart full of lights, camera and sound equipment, and a four-foot-tall tooth costume (procured from China through eBay) was perfectly acceptable to the registration desk.  Just another day in New York City, I guess. But start one tiny fire in your room, well, that somehow crosses a line.

My client had a few 99¢ stores in Manhattan, and I was hired to create content for them.  One of my projects included making frivolous internet videos for them to promote their brand.  I was given carte blanche, so that’s on them.

My concept was solid: create a video series where you have a never-ending stream of unique clients with equally unique needs, and position Jack’s 99¢ Stores as the hero which has the solution to everyone’s problems, no matter how eccentric.

I envisioned a scene where a toothless old man could fulfill his deepest personal needs.  Jack’s has something for everyone, right? So what does this guy crave the most? A giant tooth that he can fetishistically brush in the privacy of a room rented by the hour.  Of course.  The script practically writes itself.

So here we all are assembled in this dirty hotel room.  I’m behind the camera which is set up at the foot of the bed.  My son and the old man are in the bed, in a setting which suggests that there’s been some kind of kinky behavior going on. My son is wearing this giant tooth costume which has this comically stupid grin glued to its face.  I was just tweaking the hotel lights a bit before shooting, and one light just off frame was a bit too bright.  I didn’t have a dimmer with me, so in haste “someone” (me) threw a white hand towel on top of the lampshade to lessen the brightness a bit.  This worked quite well at first, adding a nice soft side-light to the scene.  No one noticed that it caught fire midway through a take, and we soon found ourselves with a considerable amount of smoke in the room.

Less than a minute later there was a sharp knock on the door, and without waiting for a response a hotel security guard was in our room.  I’ll never forget the look on his face as he quickly surveyed the scene.

There were expletives.  I had to do some fast-talking to assure him that we were not super-kinky sex traffickers filming some kind of low-rent pornography in their supremely reputable establishment, but were in fact perfectly respectable people caught in an awkward moment that anyone could have found themselves in.

The rest, as they say, is history.  The video (below) now speaks for itself. Sadly, I think that I’ve gotten much more mileage out of it than Jack ever did.

*Mildly amusing side note: this was the same infamous hotel where the FBI secretly dosed one of their agents with LSD in the 1960s, which led him to jump out of the window to his death.