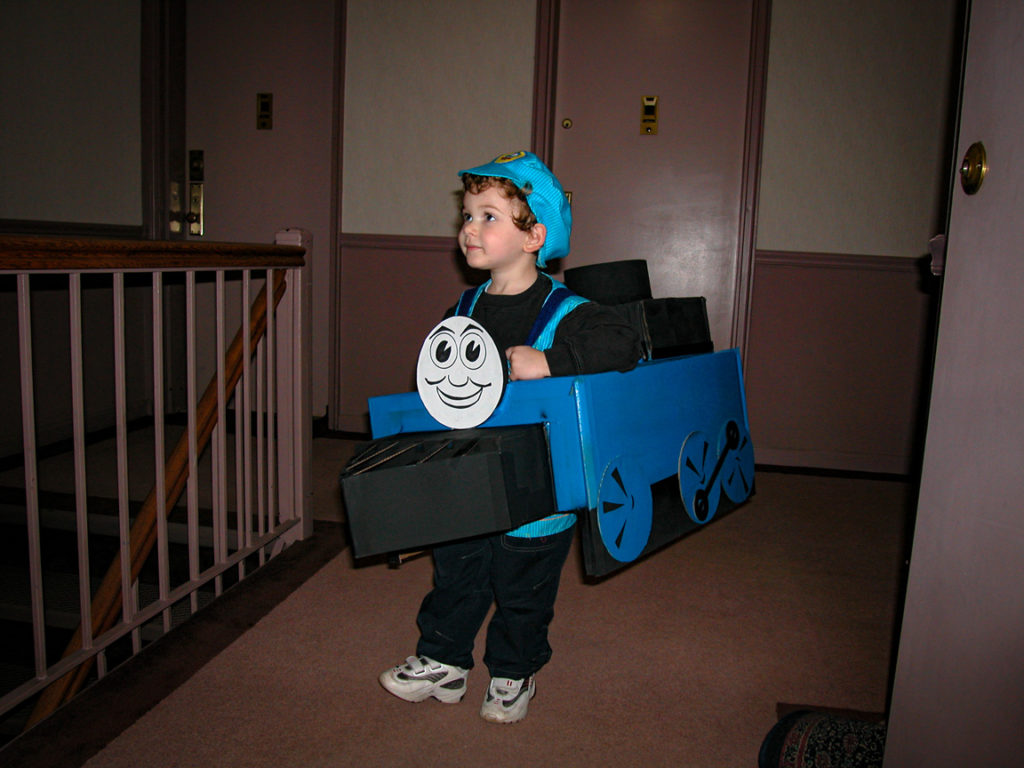 When my son was four years old he was obsessed with trains.  They fascinated him and I never fully understood why.  One late summer day, while sitting on a park bench under a giant maple tree my mother asked him during a quiet moment, “What are you thinking about Hunter?”  Without a pause he responded, “I’m thinking about trains.”  He had with him his favourite stuffed animal Lucille, a white seal which was always held tightly under his arm.

“What Is Lucille thinking about?”

After the briefest pause, “She’s thinking about trains,” matter of factly while gently nodding his head in affirmation and with a conviction that made her laugh.

My mother then proceeded to tell him that if he wanted to he could grow up to be a train, and not be a man, like his Daddy.  His eyes grew wide as he considered this.

“Sure,” she continued, “Your head will grow into a smokestack, your eyes will turn into headlights, your legs and feet will become wheels and your arms will come together to form the cowcatcher in front.”  This was a game-changer for an impressionable four-year-old.

As soon as I returned home, Hunter was desperate to tell me his news.  He recounted for me the whole process which my mother had described to him in detail.  Not only did he believe that this could happen, but he was ready to commit to this new lifestyle change for keeps.

I of course played along, and this became his new obsession as I would watch him in the living room trying unselfconsciously to position his body into train-like poses, hurrying the transformation along in his mind.

Hunter had an extensive Thomas The Train set which we would play with for hours on end on his blue woven bedroom rug.  One day would blend into the next as we sat together and imagined different stories together and acted out different scenarios using the trains, Legos, and stuffed animals.  After noon we would nap together in his bed only to wake up an hour later and pick up where we’d left off.

This was how summer stretched into the fall for us, and Hunter’s obsession had up until this point been unwavering.  My mother kept the fantasy alive with stories about all of the places he could travel to as a train.

On one or two occasions I began to notice some cracks in Hunter’s belief that this could happen for him.  A shadow of doubt touched his face on one or two occasions.  To ease him out of this fantasy gently I came up with the idea of building a Halloween costume for him of his favorite toy, Thomas the train engine.

He loved the idea of dressing up as a train for Halloween, and the thought of people dropping candy in one of his smokestacks as he trick-or-treated throughout the neighborhood.

We shopped together for supplies: blue and black spray paint, a large cardboard box, and a train conductor’s cap.

The following days were spent painting and gluing his costume together as Halloween was fast upon us.

The costume and the trick-or-treating were a success, and Hunter had a small fortune of candy which I of course ate the majority of in just a few days.  I was surprised that there was never any further discussion of his impending metamorphosis, and was happy not to have that conversation with him.