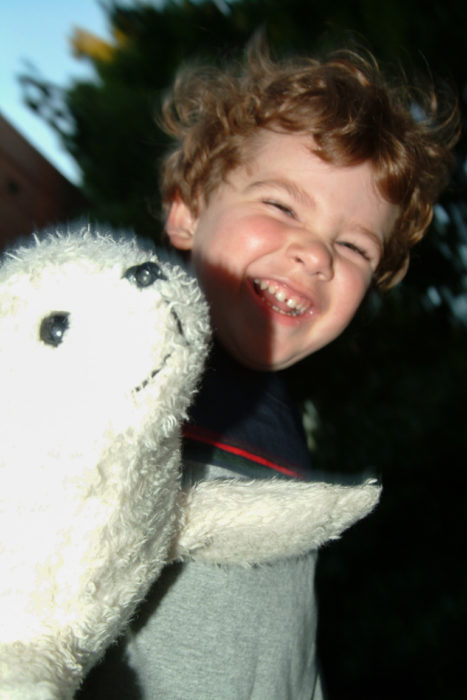 Lucille arrived at our front door one Christmas morning, unexpectedly for some, but very much coordinated by the rest of us.  It was my mother’s idea to introduce Lucille in this way.  For my three-year-old son to unwrap Lucille like any other Christmas present would be to in some way deny Lucille of some of her potential.  An even larger leap of faith would be required to animate the inanimate when its discovered lying still in a box.  But if Lucille were to show up seemingly on her own, inexplicably ring the doorbell given her obvious limitations, then she was clearly empowered beyond her appearances. The question of how she had arrived at our doorstep and had actually managed to ring the doorbell added to the mystique behind her transformative powers.

My mother and sister sat in the living room by the tree handing out gifts and chatting while Hunter and I sat on the couch emptying our stockings. The smell of fresh coffee and breakfast still hung in the air.  The doorbell rang with some coordination and a little help from a neighbor, and Hunter was encouraged to answer the door.

Lucille was there alone on the doormat, with no one else in sight.  Surprise quickly gave way to deep affection, and Hunter and Lucille were inseparable for years afterward.  Lucille and Hunter went everywhere together.  She was under his arm and held close to his chest every day and every night after that.

As a member of the family, future Christmases created the need for Lucille to have stocking of her own.  My mother stitched this by hand.  She received little outfits like fitted hats and even a black faux leather jacket.

Lucille’s personality grew as Hunter poured his affection into her.  One of our favorite activities was to gather all of his stuffed animals and bring them to my bed.  Occasionally the elusive sun, seasonally shy, would break through the winter grey and fill the room.  Hunter would crawl in with me and arrange all of the animals in a half-circle facing us on my queen size sleigh bed.  I remember the high contrast of the scene on those days, the warm golden color of the hardwood floors bright with reflected light that filled the whole room, giving it a filmic glow.  The sun raked across the dark blue down comforter in the early morning light, and in those moments life was easy.

Once the animals were all arranged, I would animate Lucille as she would take breakfast orders from the different animals in whispered tones, then come to my ear and pass on the orders to me.  “Sha-shaa-sha-shaa-shaa-sha,” I said for her, speaking to myself. I would animate Lucille and together she and I would quickly whip up the different breakfasts and serve the waiting animals as they greedily gobbled up their food.  “Scrambled eggs!  Who ordered scrambled eggs?” Hunter would take one of the waiting animals and pretend to eat the imaginary breakfasts, making yummy and chewing noises for the animals.  There was a lot of lip-smacking, followed by the obligatory, “nom-nom-nom.”

As the years slipped by, I began to wonder how much longer Lucille was going to remain a significant role in Hunter’s life. He was getting older and growing quickly, now becoming more influenced by screens and curated content than unadulterated imagination.  I was beginning to see the internal conversation he was having within himself.  Despite my constant attention to his every need, I think that Lucille gave him some security and companionship he was missing.  How do you retire something which has brought you such comfort? For the first time in his life, he was acknowledging, in his own way, a new maturity.

The day did eventually come, of course, and Hunter approached me and told me that he had decided to put Lucille away.  He was clear that we weren’t getting rid of Lucille, but just that he no longer needed to have her with him all of the time.

I was careful not to offer any judgment about his decision, but just be supportive of his independence.

That evening Hunter left to spend the night at his mother’s home.  I took Lucille to Hunter’s room and held her tight to my chest.  It was a silly thing to do, but my thinking at the moment was, in the absence of having my son to hold, here was his most prized possession for the past five years.  Hunter infused this companion with all of his love and devotion so intensely, that in his absence it might bring me some small comfort.

I woke the next morning to a quiet house in Hunter’s bed feeling less than whole without my son.  Overnight something had been lost.