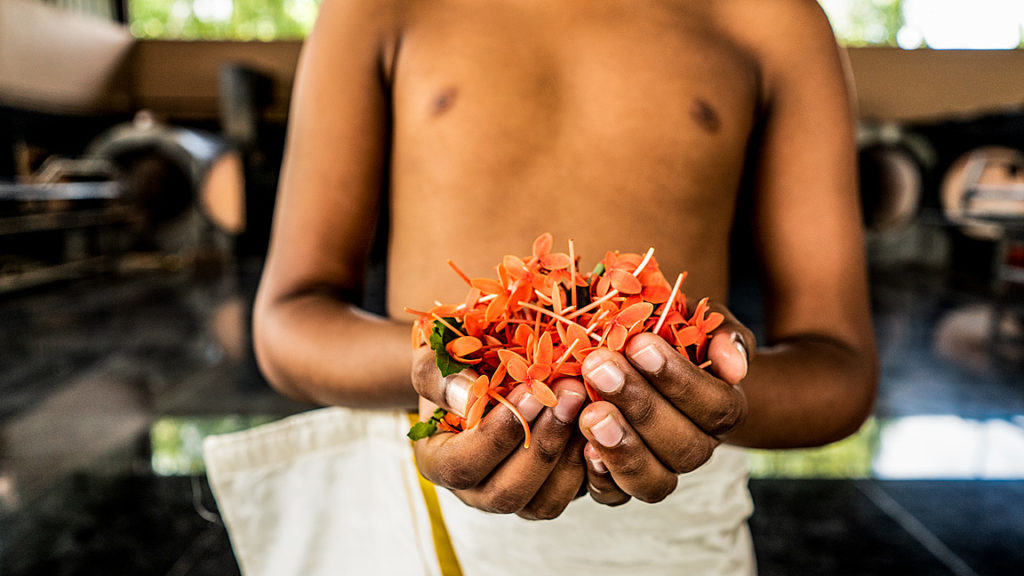 There is no escape today from the endless beauty in their faces and the drenching, exhausting heat that darkens my shirt with sweat. The ancient quaintness of their ceremony and admirable devotion to their faith is today triggered by the stark reality of a cherished family member lying dead on the floor.  The smell of fresh vegetable curry and chai tea waft over from a neighbor’s kitchen, not at all disturbed by the spectacle unfolding in our adjacent room.  Mourning-themed platitudes, universally cliched, are repeated ad nauseam while the India heat reminds me in heavy waves that I’m in this for the full-body experience.

We flew to India to immerse ourselves in ceremony, grief, and ritual.  A Hindu funeral in a remote village is like stepping back a thousand years in time.  As his body lay out on the living room floor for family and neighbors, friends and former students came to pledge their reverence and respect for their former professor, engineer, colleague, father, brother, uncle, grandfather, and father-in-law.

He died an undignified death by paratha. No one in the crowded restaurant could convince the buttery and layered bread to abandon its position and dislodge from his windpipe.  A decidedly anticlimactic end to an accomplished and sometimes difficult life.  He left behind four daughters.

My father-in-law’s death has heightened my awareness of the interwoven and layered fabric of experiences that comprise my waking life.  I tirelessly try to impose order upon these moments in my attempts to understand them as they unfold.  I do this moment to moment in a very linear way, but everything about India pushes back against all attempts to create order from its chaos.  Each time, India wins.  I surrender and let my mind drift for a second and watch the fabric unravel in a swirl of color, sound, taste, and sights no longer conjoined.  All of these sensations call for my attention equally as I cease my attempts to impose meaning upon a situation that objectively, and for me alone, has no meaning. Just to see if I can, I flip a switch and command this chaos back into order.  It snaps quickly into place before I let it drift loose again and allow meaning to slip away.  As I stand in the room of grieving distant relatives and their friends and coworkers, I am surprised how easy it is in this moment to be able to do this.

Scores of people came to say goodbye in those hours before moving the body into a refrigerated temporary coffin made of glass. This was placed in the front of the house in the driveway, where others now appeared from all directions to view the body. A small gas generator hummed its song while powering the lights in the coffin and keeping a constant temperature in the Kerala heat. 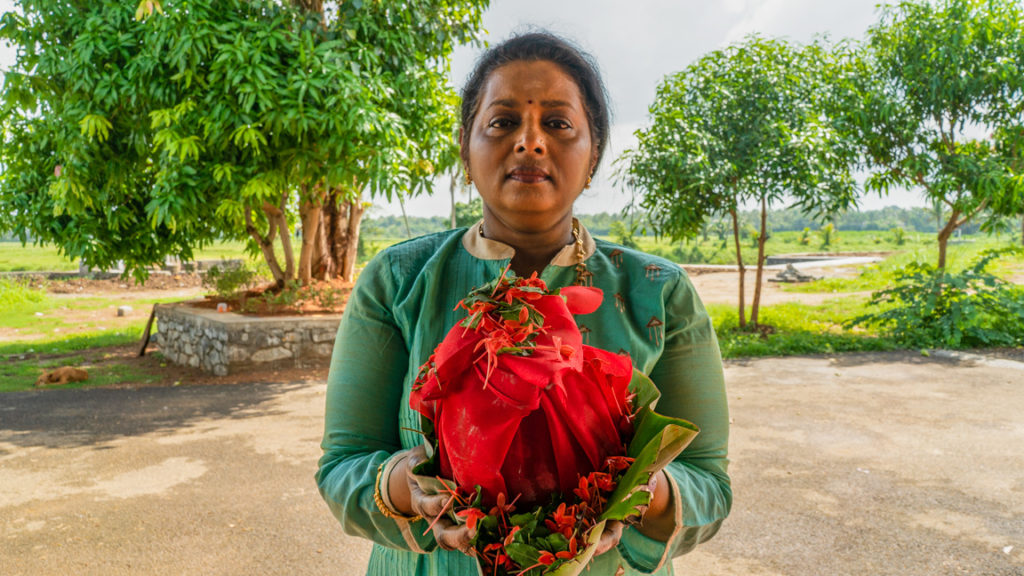 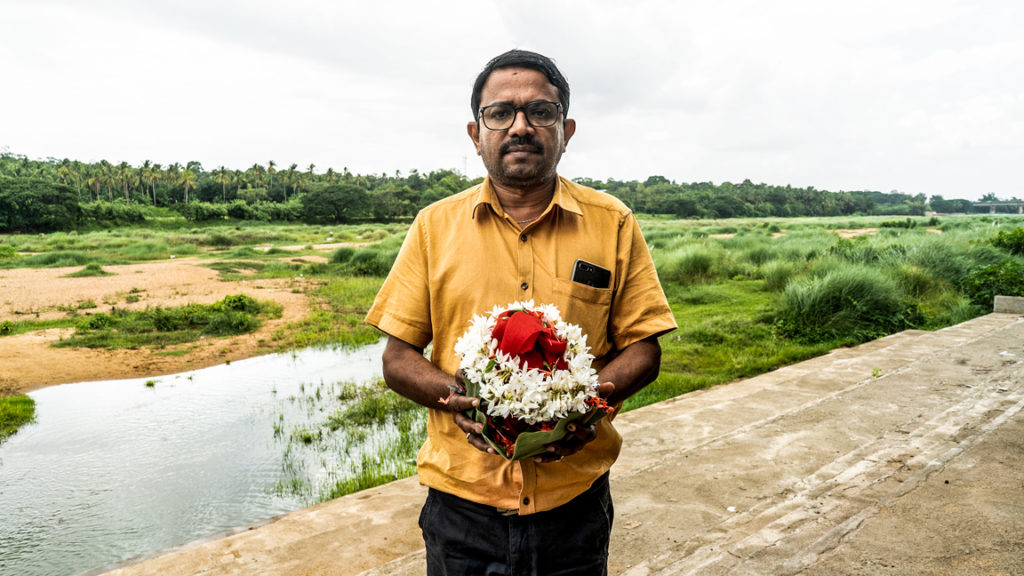 I look at the photographs I took of my family the following day at the crematorium, and I see these experiences and a thousand more etched into their faces. I see well-deserved pride and naked honesty in their expressions. For these brief moments, all pretense has been stripped away. They are generous to entrust me with their raw emotion.

Witness my young nephew as he is about to depart the final ceremony.  The orange flower petals in his hand representing the hope that maybe, just maybe the ancient promise is true: That life will in fact come out of death. But his wandering eye betrays him and suggests a different reality entirely. What else can you tell a developing nation of 1.3 billion people? “Don’t rock the boat. Next time will be better.” 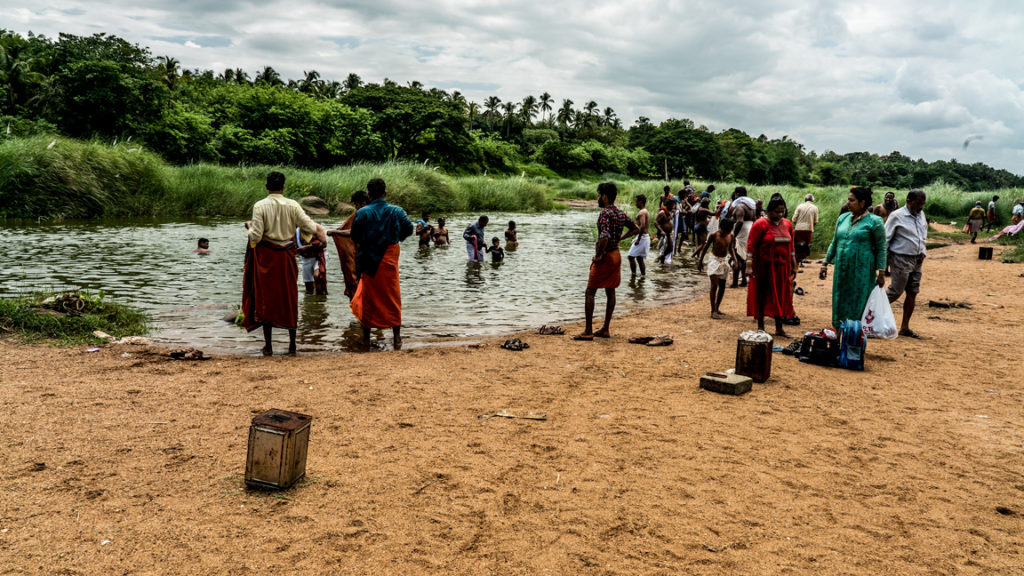